Eggplant is a very versatile vegetable with numerous health benefits. It is more commonly known as brinjal in India. It is called badanekayi in Kannada, baingan in Hindi, begun in Bengali, vankaya in Telagu, and kathirikai in Tamil.

I use eggplant in curries, rice, and even in pizza too. If you are skeptical about using it, this is the place to make you a fan of this vegetable. Eggplant is a great source of vitamins and minerals. It is an integral part of every Indian kitchen and is featured in the Mediterranean diet too. Contrary to the belief, the glossy, purple, teardrop-shaped ones are not the only variety of eggplants. They can be oval, long and slim or even melon-shaped.

Make this versatile vegetable a star of your meal. Check my collection of eggplant recipes for inspiration.

Eggplant is a nightshade vegetable that originates from India. Traditionally, small white eggplants were cultivated and has their mention in ayurvedic medicines.

Like any other night-shade vegetables, they are best consumed in moderation. Some people cannot tolerate nightshades and too much consumption may cause inflammation.

Eggplant is rich in potassium and fiber. They are very low in calories and are rich in antioxidants. They are also known to help with blood sugar level control and anaemia.

How to select and prepare eggplant for these recipes

Use eggplants that have smooth and glossy skin. If the skin is dull, the eggplant is not fresh and may have a lot of seeds. The eggplant should feel slightly heavy for its size and should be firm. When you cut the eggplant, it should have white flesh. Fresh eggplant will have minimal seeds. As the eggplant matures, the seeds increases and if an eggplant has too many seeds, it may be unusable.

It is best to soak the cut eggplant in salted water for a minimum 10-15 minutes before cooking. This will help remove any bitterness. In case you are roasting the eggplant on an open flame, remove the charred skin as much as possible.

My collection of eggplant recipes

Baingan Bharta: Baingan bharta is a smoky rustic dish that is prepared by mincing eggplant which has been charred over direct fire. The charring infuses a smoky flavour into the dish. The smoked and mashed eggplant is then cooked with onion, tomatoes, minimal spices and finished with coriander leaves.

Baingan bharta Check out this recipe

Vangi Bath Check out this recipe

Eggplant Pizza Bites: The eggplants are not the topping, but the base of the pizza (or shall I say mini-pizzas or pizza bites). These gluten-free pizza bites are absolutely delicious and perfect for a light meal.

Begun Bhaja: Eggplant fry or begun bhaja is a very simple side dish, ready in less than 15 minutes. Crispy on the outside and soft melt in the mouth inside - perfect with both rice and roti 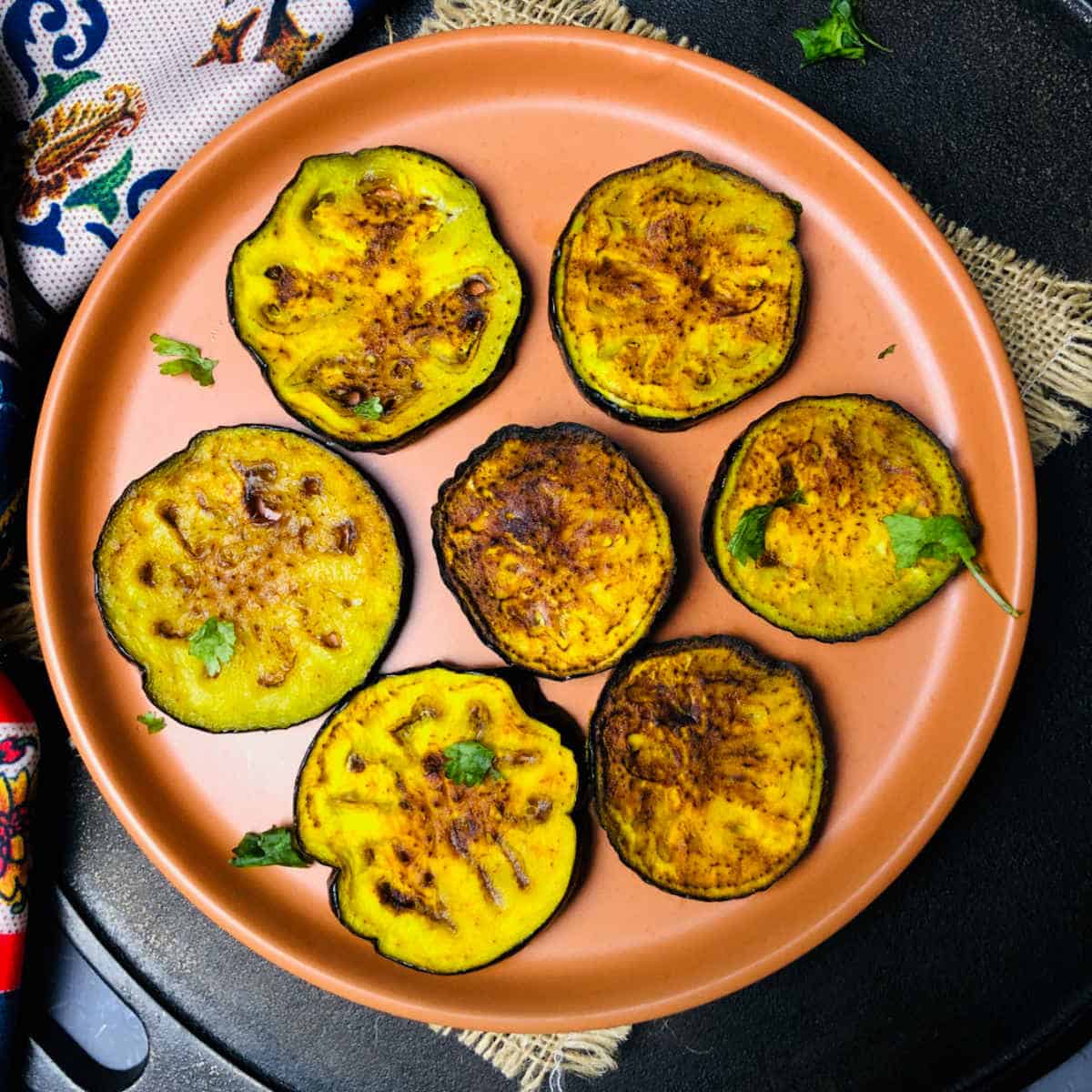 Badanekayi Ennegayi: Ennegayi and jolada rotti (stuffed eggplant curry and sorghum flatbread) is the signature dish of the northern region of Karnataka. In fact, ennegayi is a staple of most households in north Karnataka.

Grilled Eggplant and Feta Pizza: An Indian twist on a classic Greek style pizza and you won’t believe how good it tastes till you try it.